Blame It On The Genes? 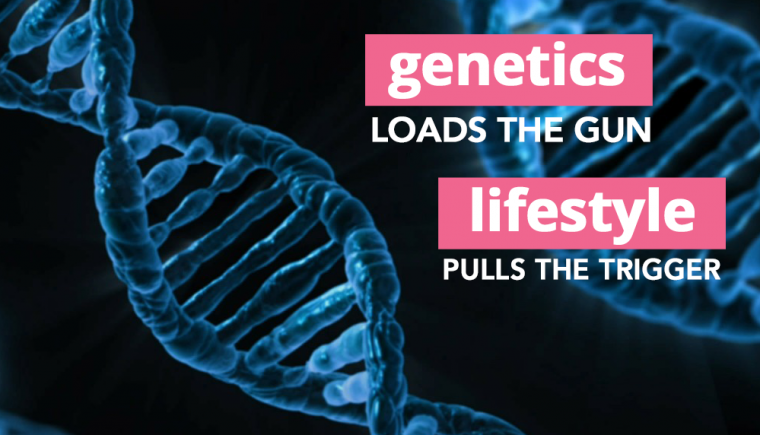 As Summer comes to an end, it is arguably one of the best times of the year, blessed with great weather, abundant parties, and the long awaited beach vacations. Imagine the sun shining above, and the waves crashing at a distance. The mere thought is exciting, to say the least, but what comes along with that time of the year is “self-confrontation”. It’s a time where physiques are put on display, and many people struggling with weight loss are left with the fear of criticism. At the root of this criticism is the common thought that obesity is caused solely by dietary lack of control and general laziness. Slowly but surely, the misconstrued ideology, as to the cause of obesity, is breaking down with the growth of scientific knowledge and public education. Although poor diets and lack of exercise can cause obesity, that surely is not the case for all individuals. There may be more at play than meets the eye!

Morbid obesity is a pandemic that plagues over 600,000 million individuals around the world, with 1.3 billion people considered as overweight. Nearly 300,000 deaths a year are attributed to obesity independent of secondary conditions. These conditions are responsible for over $147 billion dollars in direct or secondary medical costs from associated diseases of obesity, better known as “co-morbidities”(1). As a result, obesity-related research is one of the most highly funded areas in the scientific field due to its prevalence and detrimental co-morbid diseases. To date, obesity has known physiological, psychological, hormonal, metabolic, dietary, lifestyle, and newly solidified genetic basis.

You heard that right, “a genetic basis for obesity” so let’s take the time to shift the blame away from our dietary and exercise habits for the moment. The purpose of this article is to review genetic scientific breakthroughs in an effort to educate and eradicate the general stigma surrounding obesity.

To begin, it is essential to outline the basic properties of genetics to aid with comprehension of the following studies. Genetics is defined as the study of genes, genetic variation, and heredity in living organisms. Genes are tangible sequences that code for proteins and account for the entire composition of the human body. At times, said genes may be copied incorrectly leading to a mutation and ultimately altering the overall structure and function of the protein it coded for. With that said, a genetic basis for obesity suggests there is a mutated “coded region” in a person’s DNA that regulates the distribution, use, and/or storage of fat cells. To our knowledge, there are three major targeted genes that are responsible for anyone of the three aforementioned processes of obesity. These genes are formally known as the LEP, MC4R, and FTO genes.

Of the genes listed above, LEP is one of the most profound breakthroughs for genetic markers of obesity. LEP is a short-hand genetic label for the coded sequence of the genes that regulate the hormone Leptin. Initially, scientist’s linked mutations of the LEP gene to the early onset of obesity. Today leptin is known as an adipocyte (fat cell) specific hormone that regulates the creation of fatty tissue through brain signals that control satiety (feeling full) and energy expenditure (2). Moreover, Leptin deficiency has been tied to hyperplasia, hypercortisolemia, dyslipidemia, altered glucose homeostasis, infertility due to hypergonadism, and reduced energy expenditure (3). Secondary effects of a mutation in the LEP gene have even been discovered to halt normal cycles of puberty, ultimately impairing secretion of growth hormone and thyrotropin (3). Plainly said, a mutation in the LEP gene is responsible for the proliferation of fat cells in the body, initially by not properly informing the body that they are full. As a result, individuals on average will consume more food, and therefore more calories. An increase in caloric intake is directly correlated to an increased incidence of obesity. Secondly, a mutation in the LEP gene has been discovered to decrease the average energy expenditure of an individual. Consequently, the body expends less calories per day and therefore stores more calories obtained from your normal diet. Increased storage of calories translates to increased growth of fat cells within the body. As seen, a mutation in the LEP gene is a major genetic proponent of obesity and causes other chronic associated co-morbid conditions.

In addition to the LEP gene, the MC4R gene is one of the earliest discovered genetic markers of obesity. In fact, in 1998, the MC4R gene was first described as “the cause of human obesity” (4). Gradually after further research this statement was refined, claiming that a gene mutation in the MC4R is “one” cause of human obesity rather than “the” cause. Unique to the MC4R gene is its sensitivity and its susceptibility to mutation. Several studies have indicated high levels of frameshift, missense, and nonsense mutations of the MC4R gene, and in all cases are positively correlated to obesity (5-6). Furthermore much like the LEP gene, the MC4R is tied to a very early onset of obesity. The Melanocortin 4 receptor gene (MC4R) is involved in appetite control and regulation of the body’s metabolic rate (7). A mutation in the MC4R gene causes a defect in the melanocortin-4 receptor. This receptor acts as the gateway for many hormonal appetites and metabolic signaling processes. Consequently, individuals with a mutation are left with a closed gate and normal hormonal pathways that are regulated through the MC4R are “forbidden passage”. Luckily, drug therapies for MC4R genetic mutations (MC4R agonist) are in clinical stages and are close to a release!

The third and last gene known to influence obesity is the fat mass and obesity-associated protein better known as the FTO gene. Discovered in 2007, the FTO gene has the strongest correlation to obesity, although its primary mode of function is still highly debated. Some scientists believe that the FTO gene works in the brain to control cravings and satiety, while others claim a more direct effect (8-9). To illustrate the commonality of this mutation, a previous study determined forty-four percent of European subjects carried a variant version of the FTO gene that increases their risk for obesity by up to 30 percent. On average these subjects were seven pounds heavier than individuals with a normal FTO gene (10). Further studies conducted by the Claussnitzer genetics lab of Harvard Medical School delved into the biochemical processes used to influence obesity. They discovered the cells of subjects with variants of the FTO gene experienced increased activation of two other genes IRX3 and IRX5 (11). Activation of the IRX3 and IRX5 genes causes cells to “store” their energy, therefore increasing the overall obesity of the individual.

On the other hand, individuals with a normal FTO gene experience a lack of activation of IRX3 and IRX5 genes that causes the body to “burn” its energy rather than “store” it (11). Specific to fat cells, mutated FTO genes activated IRX3 and IRX5 genes causing fat cells to appear white/yellow in color. For individuals with normal FTO genes, their fat cells appeared beige in color. This finding is consistent with the long known functions of brown versus yellow fat. A greater percentage of brown fat to yellow fat is frequently associated an individual’s high metabolic rate, while the reverse is associated with a slow overall metabolic rate (12-13). As a side note, for the scientists that claimed FTO functioned on a neurological basis, the Claussnitzer group tested brain cells and found no notable difference in expression of the FTO gene (11). This finding suggests that the expression of FTO within fat cells has a major effect on obesity rather that expression of FTO in the brain. In summation, the FTO gene reveals that the bodies’ fat cells have a major influence on obesity independent of the brains involvement in dietary and exercise habits.

The main take home message for overweight individuals who are worried about criticism: It’s not solely your fault, and in some cases not your fault at all!

Rest assured a genetic predisposition for obesity does NOT mean you will remain obese. For those genetically predisposed subjects that have experienced meager weight-loss through diet and exercise, medical therapies like weight loss surgery can compensate for your bodies genetic deficiencies and promote weight loss. This by no means negates the importance of dieting and exercise, but rather depicts the bodies’ cry for support to kick start weight loss. As Caldwell says, “Your genes loads the gun, your lifestyle pulls the trigger.”